Sega Mega Modem (メガモデム) is a modem for the Sega Mega Drive released in 1990 exclusively in Japan. It allowed Mega Drive owners to connect their console to various online services provided by Sega and third parties. It enabled online play for the few games that supported it, most of which were peer to peer, thus only requiring the cost of the call. However, the later released Sansan connected to servers and charged connection fees. Sega Game Toshokan allowed users to download small games at a cost of ¥4,800 to use the service for six months[2] (although some software was available for free). Online banking was another service available through Mega Anser, with Naisu-kun Mini, Osaka Bank My Line; and Sumisei Home Tanmatsu offering alternative options. Live play by play accounts of baseball matches were available through Nikkan Sports Pro Yakyuu VAN, which also required subscription fees. 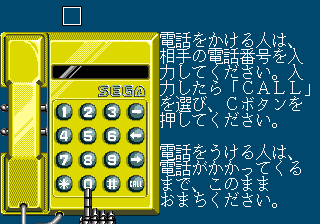 The Japanese version of CyberBall lets you dial-up a friend for peer to peer online play.

The modem connects to the back of a Mega Drive through the third DE-9 expansion port; consequently, it will only connect to a Model 1 Mega Drive. Furthermore, two models of the Mega Modem are known to exist: one that connects online through a phone line (which was sold both standalone and with the Sega Game Toshokan cartridge) and one that connects through an RS232C cable built into the unit.

Once connected to a phone line the Mega Modem could be used to either dial-up a fellow user with the same supported game, or to connect to one of the aforementioned services. As the modem only officially supported a speed of 1200 baud (1.2 kbit/s), and the only means of storing downloaded software was in the Mega Drive's onboard RAM any software downloads were required to be as small as possible. These problems were ultimately addressed by the Sega Channel which used the higher bandwidth of cable TV paired with a large amount of RAM in the Sega Channel adapter. The Sega Game Toshokan cartridge did have a small save capacity for telephone numbers and log-in details thus avoiding the need to enter them more than once. The Ten Key Pad was available to make the use of the various online banking services more convenient.

The unit was effectively written off by late 1992, with newer models of the Mega Drive omitting the modem port, and Sega announcing the end of the Sega Game Toshokan service. Despite this the modem still saw some use, with Sansan seeing release in 1994. Whilst the servers of the various services were taken offline in the 1990s rendering them obsolete, it's still possible to use the Mega Modem to play most of the online games, which used peer to peer dial-up.

A localised variant of the Mega Modem, renamed TeleGenesis Modem was demonstrated at Summer CES 1989 alongside the debut of the US Sega Genesis. Originally set to debut during the "first few months of 1990"[3], the device was pushed back to July 1990 and given a price tag of around $100[4].

While the accessory was thought to be the same as its Japanese counterpart, it was marketed as offering competitive online play across towns and cities nationwide[5] rather than something akin to Sega Meganet. On display at Summer CES was a live demonstration of (the unreleased) TeleGenesis Baseball, and Spectrum HoloByte suggested their (also unreleased) conversions of Vette![6] and Falcon[7] would use the perihperal. Cyberball and Battling Worlds were then announced as compatible games at Winter CES 1990[8].

However, Sega withheld selling the TeleGenesis Modem until "quality modem-based entertainment software" was available in the region[9], which presumably never occurred. By the time of Japanese launch in November, Sega of America were still undecided as to whether to press ahead with a localised variant[10]. Early Mega Drive (and Genesis) consoles in both NTSC-U and PAL regions include the expansion port for the Mega Modem, but it ultimately remained unused and like Japan, was removed in later revisions of the hardware.

The concept of playing video games competitively over the internet did not become a mainstream feature of gaming until well into the 2000s.