Codenamed the Sega Mark V during development[10] it is Sega's fifth video game console (following the SG-1000, SG-1000 II, Sega Mark III and Sega Master System) to be released, but only the second substantial hardware upgrade. The Mega Drive's selling point was its 16-bit main processor, with in adddition to superior graphics capabilities, allowed for a more advanced gaming experience previously limited to the arcades.

The Mega Drive is Sega's most successful video game console, with 40 million hardware units sold worldwide,[11] including more than 20 million in the United States, over 9 million in Western Europe, 3.58 million in Japan, and 3 million in Brazil.[12]. It has a software library consisting of more than one thousand games; more than previous generations of Sega hardware combined.

As well as competing with Nintendo's Famicom (NES) and later Super Famicom, Sega also found itself fighting against NEC's TurboGrafx-16 (PC Engine in Japan), SNK's Neo Geo, the Atari Jaguar, and numerous home computers, driving the term "console war" as it attempted to acheive market dominance. While the Super NES ended up surpassing the Mega Drive in worldwide hardware sales (49 million), more software was sold for Sega's console, and its 16:1 attach ratio was double that of the SNES.[13]

1993 saw this cost-reduced redesign (known as the Mega Drive II in Europe, and sold simply as "Genesis" in North America without the Sega prefix), at 22 cm×21.2 cm×5.9 cm, being introduced internationally. One of the major revisions from the original model was the removal of the headphones jack in favor of stereo output through a redesigned 9-pin A/V port. The Mega Drive 2 also used an external RF modulator (all non-Japanese Mega Drive models had an internal modulator), which was packed in with Western systems. American and European models also used a push-button toggle switch for power while non-Western models used a slide switch like the original model. Furthermore, the audio mixing circuitry was modified, resulting in noticeably different quality audio output — here is a page with audio samples, provided by little-scale.

A common myth is that the Mega Drive 2 lacks a Z80 — the truth is that it has a Z80 in a QFP-44 form factor, which is not immediately identifiable compared to the DIP Z80 used in the original Mega Drive. If the Z80 was missing, most games would have no sound (or not all sound). Beginning with the VA4 board revision, the Z80 was integrated into a custom ASIC which also incorporated the major chips of the system. 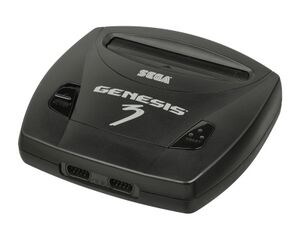 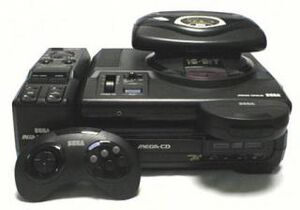