This game contain every game released in the Fantasy Zone series (bar the redemption game), plus several "new" ones. The games are emulated, though there are handful of extra options to "improve" many of them.

The collection also includes development material for Fantasy Zone II, assorted other concept art, cover art masters, full cover/manual scans for the included games's Japanese, US, and European releases, and full flyer scans for the Japanese and English releases of the arcade games (including the redemption game).

The disc also contains a number of additional games on disc, probably left-over from previous Sega Ages 2500 releases, and which are not accessible through the menus[3]. Those 30 games are: 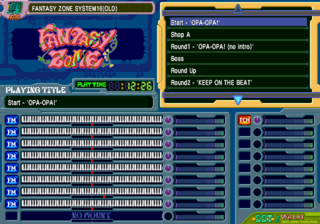 As the final entry in the Sega Ages 2500 series, a special jukebox has been included with this collection. It can be accessed by holding

on the directional pad while pressing  START  on the title screen, adding the "SEGA SOUND TREASUREBOX" option on the main menu. When accessing the Treasurebox, the collection will check the Memory Card in Slot A for any system files from the supported games listed below. If it finds any, the games included in the collections will be added to the playlist and you'll be able to listen to their music. It is recommended that you save your system file after you unlock the Treasurebox.

Note: Individual tracks from Fantasy Zone II DX must be heard in-game for them to appear in the Treasurebox.

Console roms found in the disk

3 SMS titles are unrecognized. It is sdi_b.sms, quartetj.sms and phantasystar1_j_01_hira.sms. In fact it is modified versions of SDI, Quartet and Phantasy Star Japanese versions.