History of Sega in South Korea

South Korea has and continues to see a number of Sega products imported into the country, in addition to producing its own hardware and software for Sega systems.

Korea OACS were responsible for the official distribution of the Sega Mark III. 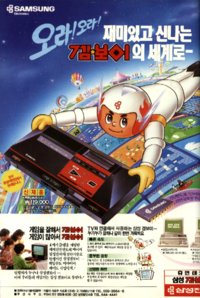 A promotional magazine advertisement for Samsung's rebranded version of the Sega Master System, the Gam*Boy.

Most of Sega's home consoles were distributed in South Korea by Samsung. The names were changed because the Japanese products were illegal in this region and thats why the Sega Master System was sold as Gam * Boy (later as Aladdin Boy). A cartoon depicting a Japanese samurai threatening a South Korean peasant with a copyright infringement claim.

In 1994, Sega Digital Communications announced the launch of Sega Channel within a year, however, it is not known today whether this happened.

Sega Saturn was sold as Samsung Saturn. In February 1997, after poor Saturn sales Samsung exit from the gaming business.

In September 1997, Sega Saturn returned this time under its original name. The distributor was Kama Entertainment and Korea Data Systems. Both companies also brought Sega Mega Drive under the original name. Wooyoung System translated games into Korean. Some of the games released by Samsung have been released for the second time.

In 1996 Sega formed a partnership with Hyundai, creating Hyundai-Sega Entertainment to bring arcade games and components to the country. The move was expected to produce $25 million USD in revenue for the two companies[1].

Soon, Hyundai decided to release Sega games on PC. In 1998, the company announced that it will become the distributor of the new Sega Dreamcast console. In late 1999, it was promised that the console would be available in early 2000 but the system was still not released. In May 2000, it was decided that the consoles will be imported in unchanged Japanese version. 25,000 units were sent to Korea before Hyundai broke cooperation with Sega in September 2000. It is unknown if someone later sold Dreamcast in Korea.[2]

Since 2003, Sega Korea is a representative of Sega in South Korea.