History of Sega in Poland

The fall of communist Poland in the September of 1989 led to the peaceful transition to the Third Polish Republic in the years that followed. No longer under strict political regimes and the wider sphere of influence from the Soviet Union, Poland was able to open its markets in the early 1990s, enabling the country to import luxary items (such as video game consoles) from elsewhere. 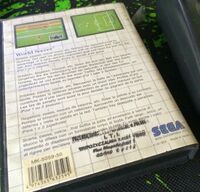 Like many of its contemporaries, Sega did not immediately create distribution channels across the Eastern bloc, so in order to supply video games to the country, local companies were forced to innovate. Bobmark International was among the first companies to enter the Polish market, and in 1991 began distributing Pegasus consoles in the region - a clone of the Nintendo Famicom which also found success across the former Yugoslavian republics around this time.

In 1991, in other parts of the world, the Blockout game by the Polish California Dreams and Logical Design Works studios was released on Mega Drive. It was the only Polish game for this system.[1]

In 1992, ITI, a company dealing in the distribution of video equipment and VHS cassettes, decided to distribute Sega Master System. Unfortunately, the console was not popular mainly due to the coincidence of its premiere with the increasing of popularity of Pegasus console which was cheaper than the Master System and better advertised. After several months, ITI ended sales due to poor results.

Many people who went abroad, often bought consoles for child mostly from Sega or Nintendo. These consoles aroused big interest in many people who only saw the widespread Pegasus consoles. They were also a problem because the owners could not get games to the console.

At the beginning of 1994, the first Sega Mega Drive clones appeared. Hegatar Computing started selling the Super Drive console[2]. There were other clones such as Pro 16-Bit and Macro Drive. Their price was about 300~350 PLN (depending mostly on whether it has game in the set) in 1994 and 250 PLN in 1995.[3] Some stores started to sell bootleg games which cost 50~100 PLN. 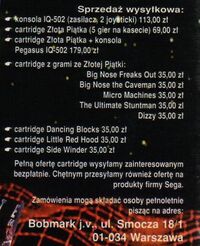 In advertisements of Pegasus from the end of 1994 and the beginning of 1995 there was information about the possibility of sending an offer for the Sega console, which remained for a long time the only sign about Sega

The Pegasus line would become the dominant console across Poland, however 1994 saw a change in the law preventing Bobmark from selling another unlicensed system. Initially, the new law was not followed very accurately, however, as time passed, it began to have more and more influence on Bobmark's operations. This change also caused interest of Sega and Nintendo who started talks with national distributors about selling their consoles.

Sega consoles didn't sell as well as Pegasus systems. This was the result of poor advertisement of Sega video games and further support of the Pegasus console by Bobmark who considered the agreement with Sega as an alternative in case of famiclone failure. Also, original Sega consoles, just like Nintendo and Atari products could be bought mainly in larger cities such as Warsaw, Wroclaw, Katowice, Krakow, Poznan, Lodz however, from month to month the number of stores selling consoles in other cities was constantly increasing.[4] Top Secret editors made in 1994 a poll which revealed that readers have the following consoles: CDTV-10%, Pegasus/Nintendo/Game Boy/Supervision-8%, Mega Drive/Sega-1%, Others-3%.[5]

In begining of 1995, Pegasus sales began to decline. Bobmark earned less and less, and in addition to the Pegasus counterfeit, more and more powerful consoles such as Super Nintendo, 3DO, Amiga CD32 and Atari Jaguar were advertised. The first sign of changes was saw in March 1995 when Bobmark announced Pegasus 16-bit.[6] In the meantime, Poland saw release of Mega Drive II and add-ons Mega CD II and Mega Drive 32X. More adverts about Sega began to pop up in comics and magazines. Release of Sega Saturn was moved due to news about console problems in the United States. Instead (and possibly with the blessing of Sega), Bobmark began selling the unlicensed Taiwanese-built KW-501 Mega Drive clone as the Power Pegasus. Released in September 1995 in preparation for Christmas and hoping to trade off a more successful brand, it too failed to catch on. Despite lower price than original Mega Drive, system was already outdated and poorly promoted which resulted in his disappear among stronger competitors and poor sales.[7][8] It was the last year in which Bobmark made a profit. 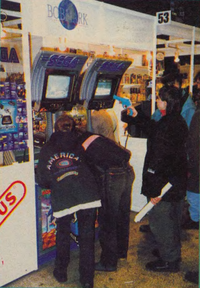 On March 1, 1996 Bobmark got exclusive distributor license and released the Sega Saturn on event called Play Box 96.[11]Although it has been on the market since then, full retail sales started in May 1996 after Gambleriada Wiosna 1996. Poland was the second priority market among the Eastern Bloc countries due to the second largest population in the region and the improving economy.[12]The whole 1996 was marked by an aggressive advertising campaign against Sony PlayStation which was released on January 1, 1996. Sega's 32-bit console gained considerable popularity in Poland, but was not as popular as PlayStation due to the high price of consoles and games. [13]

Initially, Saturn was 300 zlotys cheaper than its competitor, but it did not last too long. In September 1996, the PlayStation price was reduced to PLN 999. As part of the marketing campaign, it was announced that the Saturn at the Bobmark's headquarters and in Makro Cash & Carry stores will cost PLN 999 while in other stores, the console with the game Daytona USA will be available for PLN 1198.[14] Sony also lowered the price of games, which Bobmark decided not to. The difference was about PLN 20. System was promoted during games events like Turniej Virtua Fighter 2 and advertised on the new TV program Escape.[15].

Bobmark still sold older Sega system like Mega Drive and Game Gear, but for Master System and Mega Drive add-ons, customer could bought only games. Mega Drive from 1996 performed a little better, because the local resellers were interested in that console. This could be seen on the basis of magazines such as Secret Service, where in the January 1996, 20% of readers own consoles (PSX-5%, Pegasus-4%, CD32-3%, Jaguar-2%, Game Boy-2%, Rest-1%)[16] and in 1997 already 27% of readers own consoles (PSX-5.7%, Game Boy-5.6%, Mega Drive-2.4%, Saturn-2%).[17][18]At the end of 1996 on Gableriada, Bobmark, realizing the existence of a large group of Mega Drive owners, promised to continue supporting this console.[19] In 1996, the Klub Sega was created and TCI's technology group got the rights to distribute the Sega Channel in Poland, but it is not known that the service was launched there.

In 1997, Saturn's advertising began to slowly disappear. The last big promotion was Wygraj Samochód z Sega Saturn. This year stood under a rapid decline in the price of the console to adapt to the Playstation and Nintendo 64, with the price difference between Saturn and PSX games, despite the reductions, was always around 20 zlotys. During the summer of 1997 there was no new console ads. In September, Bobmark, knowing that in the years 1996-1997 suffers big losses and Saturn is not able to do anything anymore, decided to break the contract with Sega. Founders of Bobmark decided to focus on established in 1993 drink producer Hoop company which began to make a lot of more money than consoles distributor.

At Gambleriada Jesień 1996 the Bobmark stand with Sega consoles was considered one of the best.

In the October 1997 Lanser became a Sega distributor and continued to sell Sega Saturn.[33]

Since 1998, the sale of Sega games on the PC has been taken by Marksoft.[34]In the same year, Sega Nomad appeared in unofficial importers.

On October 18, 2000, Lanser signed a contract with Sega for the distribution of Sega Dreamcast. The premiere was announced on December 1, 2000 at a starting price of PLN 999 and on this day the release of 45 games with Polish instructions was promised (the back of the box was translated into Polish using self-made stickers).[35]Their number increased to 49 games, and 20 new titles were announced by the end of the year. Dreamcast Internet was announced for the third-fourth quarter of 2001. The late premiere was explained by the price of the console, which in 1999 was not favorable enough for Polish conditions.[36]

During his lifetime, Dreamcast was called DeCek or Makaron (eng.Pasta) because of its logo.[37] In March 2001, a price reduction was announced and the console cost PLN 699. After the price reduction, over 10,000 consoles were sold. In September 2001, there was another price reduction, which also increased sales. Piracy also helped with sales of consoles.

In February 2001, there was a plan to release a Dreamcast magazine called My Dream, but it is not known whether it was released.[38]

The Sega games released by Empire were distributed by Techland.

Nowadays, Sega arcades are distributed by Magic Play and Eurogames.[52][53]They can be found in some shopping centers.

In 2003, CDP became the exclusive distributor of Sega products.[54] The cooperation lasted until 2014 in which the functions of the distributor were taken over by Cenega. This was due to problems in the CDP company.[55]Cenega is still the official representative of Sega in Poland and throughout the Visegrad Group.