History of Sega in Bulgaria

Bulgaria which belonged to the Warsaw Pact did not have access to consoles. Mass demonstrations in November and December 1989 influenced the creation of a democratic parliamentary republic and the first free elections were held on October 13, 1991. Then the road to Bulgaria for foreign companies was opened.

At the early 90s in Bulgaria, Terminator 2 famiclone modeled after the Sega Mega Drive, became very popular. Lack of Nintendo and Sega on the market caused that the console was unrivaled. Some companies have started to take advantage of the popularity of the console. The Wen-BC has signed agreements with Chinese companies for the production of unlicensed cartridges and later they sold them in Bulgaria. There was also a Balkantronic that produced cartridges and sold them in special packaging. This company also released Terminator 3, which differed only in packaging and wasn't as popular as its predecessor. 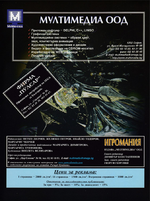 In English: "Pulsar company, distributor of Sega in Bulgaria,"

Around 1994, the Pulsar company took over Sega's distribution in Bulgaria. They released Sega Mega Drive II (EU PAL and Asian PAL), Sega Master System II (EU PAL), Sega Game Gear (EU PAL), Sega Mega-CD II (unknown specification) and Sega 32X (Asian PAL). Mega Drive quickly became the second most popular console after Terminator 2. The popularity of the Sega Mega Drive console has prompted many to distribute bootlegs. Wen-BC noticed the popularity of the console and decided to sold the unlicensed cartridges for Mega Drive. There was many bootleg consoles on the market that can be found to this day.

Famicom clones appeared on the wave of popularity of Mega Drive in the country, which looked like Mega Drive in a green box from Asian distribution.

In 1996 Sega Saturn (EU PAL) was released in Bulgaria, but it was not as popular as Mega Drive which was sold until the end of the 20th century. In 1998, the Mortal Kombat 3 Ultimate Tournament took place in Sofia which was the last major action associated with Mega Drive in this country. Sega Dreamcast (EU PAL) was also sold in the country without much success.[1]

Pulsar was distributor of Sega until 2020[2] when CD Media took rights to distribute Sega games.

Nowadays Playground is an exclusive distributor of Sega Amusements Europe.[3]